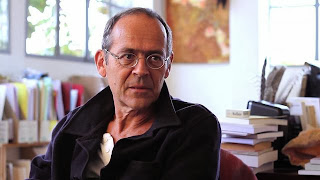 In his article, "Technology and Politics: A Response to Bernard Stiegler," Richard Beardsworth (author of Derrida and the Political) argues that Stiegler's work suffers from a 'technological determinism." While he praises Stiegler's political engagement and his brilliant re-reading of Husserl through Derrida, he argues that Stiegler does not take into account the many "non-technological" details and distinctions in our current economic. This leads Stiegler to a too bleak view of the possibilities inherent in capitalism and levels the multitude of affects available in contemporary society.

I find Beardsworth's critique to be very odd, since it seems that in his most recent work, Stiegler is, if not optimistic, at least offers contemporary technologies (produced by capitalism) as a way out of what Stiegler calls a "generalized proletarianism." Beardsworth point out that Stiegler has shifted Marx's alienation from the "producer" to the "consumer." While he doesn't quite say that this move is "illegitimate" he approaches it when he calls Stiegler's conception of our contemporary condition as "too Greek." Here, Beardsworth is referring to Stiegler's return to Plato's concern with the play of hypomnesis and anamnesis.

Surprisingly, Beardsworth relies on a "classical" reading of the modern economy, implicitly accepting the narrative that the the economy is divorced from social whole. He accepts as a matter of course that the economy, via modernization, is separate from the social, which is not the case in Greek society. For Beardsworth, there is no escape from capital as our governing logic. The best we can do, then, is to find "the right strategies to tame the excesses of global capitalism" (188). He puts it succinctly on the next page:


"Since there is no systemic alternative to capitalism at this moment in history, the question of political economy is one of whether effective regulation of capitalism is possible or not for the world as a whole" (189).

To be fair, Beardsworth makes a good point that capital is global, and Stiegler does seem to suggest at times that, for instance, Europe might lead the way in this new "politics of memory." However, in a recent talk, Stiegler argues that we need a global network of intellectuals committed to research. Whether this includes economists, strictly dealing with the global economy of capital, is an open question, but one may speculate that this must be the case. It's also questionable if the goal for Stiegler is the eradication of or an alternative to capitalism. Surely, if it is an "alternative" to capitalism, it is one that comes through capitalism and the technological affordances made possible by its system.

But for Beardsworth, it is global capitalism as a system, one that needs to be analyzed on a particular and empirical level, that alienates us from forming a "we" rather than the problem of collective knowledge. I really don't know how to argue against this point, except that Beardsworth only really seems to suggest that in addition to Stiegler's call for a pharmacological politics of memory, political-economic critique should go on as usual. His example, for instance, is the regulation of offshore capital.

But then, ironically, is not Beardsworth offering a "technical" solution to a very "cultural" problem , one that is constituted by our originary technicity? That is, doesn't Beardsworth suggest here that it is not a philosophical problem of the "waning of affect," but that we should simply "regulate" and try and control, to reign in the effects of capitalism (c.f. Jameson on affect)? While this "devils in the details" approach certainly allows us to move forward "progressively" is this enough? Furthermore, what would the role of the academy, the arts, and the Humanities be for such a solution? Is Beardsworth really suggesting that humanities scholars have little to contribute except "empirical" critiques of global capital, which will ultimately read to anyone outside English and philosophy departments as silly and insufficiently knowledgable?

Stiegler's attentiveness to "psychopower" and the ways in which particular technologies (for instance, marketing, which we will return to when we get to Postman) are used to control us indicates that far from making "generalized" claims without "empirical" evidence, Stiegler is very interested in using the insights of scientific research to his benefit. The point remains though: Stiegler does not speak of the specificity of the economic system (if indeed it is autonomous from 'the social').

Following the narrative of Beardsworth's article, I turn now to Stiegler's transformation of Freud. Acknowledging that Stiegler's reading of Freud is imaginative and "dynamic," Beardsworth essentially argues that this "technological" reading of the libidinal economy denies "the specific autonomy" of the domain under question. This domain? The autonomy of the depth-psychological.

This is a strange turn -- the autonomy of the depth psychological? Stiegler's point, following many recent scholars, is the that "brain" or even the conscious/unconscious is not merely located in our heads, but distributed in our environment, as it always has been, through hypomnesis. How, one might ask, can we talk about the autonomy of the depth psychological? Beardsworth here seems to accept the idea that neuroscience is the final word on what he calls the "mind-body" complex. What we are seeing now, however, is that some neuroscientists are saying, essentially, Spinoza was right! (Damasio). Beardsworth clearly doesn't accept the radical re-reading of technics, as he calls technology a mere "background condition" for the whole "psychic apparatus" (is not the 'psychic apparatus' itself a distributed technology?). Instead of a close reading of Stiegler's adoption of Freudian concepts, Beardsworth returns to Freud's concepts in order to, essentially, make the same point as Stiegler will have made:


One must, however, wait to see what new forms of parenthood adopt the hyperindustrial support and what new forms of sublimation will come to structure the coming generations' sense of conscience. These new forms may be weaker than either traditional or modern forms of close social bond [. . .] I am arguing that we cannot know at this very early stage of our hyperindustrial age, although Stiegler is nevertheless right to call for critical synthesis. The political adoption of the hyperindustrial support will take time--as did monotheism to adopt non-orthographic writing and the social contract to adopt the alphabetical word. (195)

I do not think Stiegler thinks that such adoption comes automatically or that it won't take time. As he says in another place, the pharmakon always enters as a poison, not a cure. However, the poison is the condition for the possibility of the cure, as it is only by poisoning (the operation of deconstruction) that the possibility of the 'new' arrives. So I have to disagree with Beardsworth that for Stiegler the pharmakon represents an "ambivalence" rather than an "aporia" (as it does in Derrida) because its not that its either/or, but that the pharmakon is both/and -- and this is necessary for the operation of pharmacology. Thus, although Beardsworth is right that Stiegler probably shows a little too conservative when he speaks of generations "losing" their superego, as if there once was one, in Taking Care, I do not think they are that far apart in their position regarding the libidinal economy.

****side note**** -- Although in a recent interview Stiegler has promised us a more thorough engagement with Freud and Lacan in volume 5 of Technics and Time, it is worth noting how little Lacanians have attempted a critique/reading of Stiegler. Is it possible that this "superego" is something very close to the ego-ideal, or would it be more akin to Lacan's "Name of the Father" (the symbolic)?

Furthermore, Beardsworth seems unaware (and perhaps these articles were not published at the time of writing) that Stiegler sees a lot of potential in internet technologies, especially since we now have the possibility of producing meta-data as individual citizens. Beardsworth writes, "the internet is already creative politically. Education must certainly help to supplement this emerging creativity with the art of judgment" (195).