"Science" in the Humanities

I can't remember when, but it may have been over drinks and a bonfire, a friend of mine, who has a background in science remarked that she thinks the humanities have a reductive straw-man concept of what science "is" and tries to do. Despite having little background in formal science education, I have also thought that this may be the case, since  "science" is hardly a unified field as Terrence over at Agent Swarm recently has pointed out (echoed by Adam over at und fur sich -- I'm not sure which post came first).

I spent some time with a friend who was doing research in immunology and learned that immunologists see the "ecological" sciences as less sciences. In other words, there is just as much debate between the sciences (because, again, scientific paradigms are not unified and are splintered into different focuses that have different goals) as in the humanities (Literature proper vs. 'rhetoric and composition' vs. 'new media' vs. 'theory' vs. digital humanities -- I'm far from suggesting these don't interpenetrate one another, but these are some of the disciplinary identities that are currently floating around).

Without a doubt, as Levi Bryant has emphasized in his posts, the humanities should not shun science, but at the same time, do we not have a different relationship with knowledge? I realize that I am essentializing "the humanities," as much as we have essentialized "science," so let me narrow it down to "English," which at UF is a strange hybrid of literature, composition, philosophy, "theory," psychoanalysis, ethnography, etc. etc. We have a very "broad" definition of our department. Anyway, I am getting away from my point. . .

Despite my misgivings of treating science as a unified field or reducing science to one dominant way of epistemology or ontology, I would like to affirm that our treatment of the sciences is about on par with what I am going to call "pop science" books, written by renown scientists for the general public.

In the public intellectual sphere of books like Regenesis (discussed in more detail below), The Selfish Gene, Consilience, there is just as much "essentializing" and "theorizing" and "speculating" about where science is taking us as in academic articles in the humanities. In some cases, academic theorists go into even more detail about how these theories are constructed. For instance, Thierry Bardini in Junkware spends 3 chapters discussing the genesis of Watson and Crick's theory of DNA, mobilizing a specific critique that has political ramifications of Richard Dawkins' The Selfish Gene. N. Katherine Hayles in How We Became Posthuman narrativizes the cybernetic conferences to bring forth the tensions and decisions that were made in order to come to agreement about the field. Some may find these tedious, but I find them fascinating as they take into account the "material" reality outside the laboratory (in letters, conference presentations, transcripts, etc.) that eventually result in a scientific "movement" or "discovery" reported in the newspaper under the headlines "science." Hayles and Bardini both take seriously Sherry Turkle's demand at the end of Evocative Objects that we must tell new stories, counternarratives to the one presented by the mainstream media. 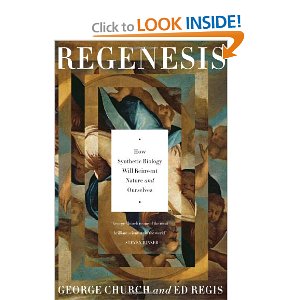 The question for me is how our stories are different from the "narrativizing" of science we find on our pop science book shelves aimed toward the general public? But even if our stories are at the level of abstraction or at the level of the regulative genres of writing/recording (see Spinuzzi) that help form a scientific discipline and are the same "level" as the popular science books, we should at least be OK with that since even the "hard scientists" when explaining the implications of their works resort to the same kind of rhetoric, sometimes sacrificing an "interesting anecdote" for a hard critique of dominant paradigms.

In order to illustrate further what I mean, I want to take George Church's and Ed Regis's recent text, Regenesis into account. I saw Church on The Colbert Report discussing his new book and figured I had to read it as the chapter titles dealt with issues I raised in my thesis. I would post the interview, but it is currently unavailable. . .I'm not sure why. Probably copyright issues.

Instead of buying this text due to fund restriction and since it was not in our library yet, I just went to the local Barnes and Noble and causually "browsed" the book (speed skimmed it in an academic fashion). Undoubtedly, the book contained some scientific descriptions as well as narrative expositions of the origins of Genetic technologies. The subtitle is "How Synthetic Biology will Reinvent Nature and Ourselves." I've noticed that a lot of the subtitles of pop science books directly address an individual reader, which suggests that it will serve to teach them something that will give them an ability to do x,y, or z. These titles are sexy and make you want to read them. So this one claims that synthetic biology will reinvent us in some major way. I'm not disagreeing, but a scientific paper (and even a humanities paper) would hardly make such claims within the title.

Let us move to the rhetoric of the inside flap:

"Imagine a future in which human beings have become immune to all viruses, in which bacteria can custom-produce everyday items, like a drinking cup, or generate enough electricity to end oil dependency. Building a house would entail no more work than planting a seed in the ground. These scenarios may seem far-fetched, but pioneering geneticist George Church and science writer Ed Regis show that synthetic biology is bringing us ever closer to making such visions a reality.

In Regenesis, Church and Regis explore the possibilities—and perils—of the emerging field of synthetic biology. Synthetic biology, in which living organisms are selectively altered by modifying substantial portions of their genomes, allows for the creation of entirely new species of organisms. Until now, nature has been the exclusive arbiter of life, death, and evolution; with synthetic biology, we now have the potential to write our own biological future. Indeed, as Church and Regis show, it even enables us to revisit crucial points in the evolution of life and, through synthetic biological techniques, choose different paths from those nature originally took.

Such exploits will involve far more than just microbial tinkering. Full-blown genomic engineering will make possible incredible feats, from resurrecting woolly mammoths and other extinct organisms to creating mirror life forms with a molecular structure the opposite of our own. These technologies—far from the out-of-control nightmare depicted in science fiction—have the power to improve human and animal health, increase our intelligence, enhance our memory, and even extend our life span.

A breathtaking look at the potential of this world-changing technology, Regenesis is nothing less than a guide to the future of life.

First, I want to point out that there is a concrete division (at least at this level of discouse) between 'nature' and human life: "Until now, nature has been the exclusive arbiter of life, death, and evolution; with synthetic biology, we now have the potential to write our own biological future."

As most writing teachers know, "writing" is never fully in our control (nor is language) so to "write our own future" is still to live with contingency. This is a small point, but I think that claiming that we can now "write" our biological future is in essence to say that we are in control of where we are going and this assumes that we know who this "we" is (or who the "we" ought to be).

Second, note the contrast between the dreaded science fiction "out of control nightmare" with the "powers" of these new technologies. These "powers" are most extensively explored in the "epigenetic epilogue," titled "+1 year, The End of the Beginning, Transhumanism and the Panspermia Era (Societal Risks and Countermeasures)" This is the chapter I read closely and the one I want to focus on. Due to the method I chose to encounter this text, I will be unable to cite exact passages.

The chapter mainly is mainly addressing the problem of control, drawing on Francis Fukuyama and Ray Kurzweil. Although Fukuyama makes a decent argument in his text, both he and Kurzweil, although on opposite sides of the spectrum, both have an essentialized view of the human. Fukuyama uses statistics and Kurzweil betrays his concept in his discussions of the future. Fukuyama sees our "Posthuman future" as an immanent disaster and Kurzweil reads our posthuman future as an immanent transformation of human transcendence and control. Church and Regis straddle this line of thinking, erring on the side of Kurzweil.

One movement discussed briefly, and which I discuss in more detail in my thesis, is "Biohacking." Regis and Church seem to think this is a real threat to the control of biological life, and offer some general ways that we might keep it under control of experts. But as I point out, these tinkerers are doing things mostly on 6th or 7th grade level and the threat of bioterrorism is greatly exaggerated in popular discourse. Still, Regis and Church, though eschewing his paranoia, follow Fukuyama in arguing that problems will largely be a manner of control and regulation, while still recognizing the difficutly of enforcement of possible regulations.

There is no discussion of BioArt, which of course, serves no utilitarian value for the human race, so why discuss it in a book on what science will be able to do for us next? (catch my sarcastic tone?)

I bring up Regenesis to show that popular science books by scientists are not enough and that the humanities does have a role to play in theorizing concepts and rhetoric of science (and various sciences -- physics, ecology, immunology) and that the detail and rigor we can bring to the table is at least on par with books by scientists that claim they can predict or illustrate what developments in science have to offer.
I don't think these scientists would disagree with me as ultimately Regenesis ends with a lot of questions (left unanswered -- as they should be) about the ethics and politics of scientific experimentation.

Popular science works pepper their texts with formulations from great authors, theorists, and philosophers in order to frame their theories in a more interesting and accessible manner. Humanistic discourse is usually the clothing that dresses up scientific discourse. This is really no different from the humanities using concepts and paradigms of the sciences to expand our own discursive horizons.