BwO -- Or rather, Body dis-organized 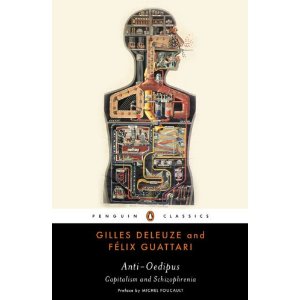 I figured I owed a post on Ch. 6, since most of my last post dealt with Chapters 3 and 4 in a quasi- "poetic" or "indirect" way. Here, I will retain a semblance of my control over my discourse as I simply recount what I "got" from this chapter.

The BwO is, minus the rhizome, probably D&G's most cited concept. Until I read this chapter, I really don't think I understood the point of the concept, excepting the idea that without organs, the body would be a free-flow of desires rather than blocked. In other words, I understood the BwO as a trope for a system of desire, but now I see that the plane of consistency is the ABOLITION OF ALL METAPHOR, its got to be a bit more (and a bit less) than that.

First, we can never BE a Bwo: "You never reach the Body withotu Organs, you can't reach it, you are forever attaining it, it is a limit." (150)

Second, there are many "false" BwO that are sometimes mistaken for the real deal. One of these appears to be the Junkie (cf. Burroughs).

Third, and most importantly, ""The BwO is opposed not the the organs but to that organization of the organism called the organism" (158).

The second and third point are related because the people who think they have achieved the BwO have actually emptied themselves out rather than disturbed or distributed (or deterritorialized?) their organization. Indeed, the becoming-BwO is couched in musical terms (making it minor again) rather than physical:

"The important thing is not to dismantle the tonal by destroying it all of a sudden. You have to diminish it [musical pun intended?], shrink it, clean it, and that only at certain moments" (162)

Thus, becoming a BwO is a slow process, a process of increasingly incremental "diminishing" of your c(h)ords. Becoming a BwO is also about becoming a-signifying -- not allowing your body to be articulated as unified into an organization of the organism.

The key to becoming the BwO and "schizoanalysis" will not to denounce "false" desires (psychoanalysis's phantasies) but rather: