Stiegler and Lacan on 'the Drive' (Trieb)

"The ideal beings of ontology must be replaced by infinitive motives," infinite motives being taken in the Deleuzian sense (another word might be "tendencies"). Stiegler also links the infiitization of an object's motives to Husserl's intentionality, with a Freudian tone. He writes, "In other words, the intiutive experience of infinite objects of knowledge, that is, of consistences, is opened up by that projector of infinities that is the unconscious--and reason is as such above all a matter of desire" (47). So when Stiegler discusses this idea of "reason" he is not thinking of instrumental rationality, but rather a reason based in desire, the theory of the unconscious, and a certain transformation of intentionality via Winnicott. Indeed, Stiegler calls the point of departure for his new critique a "critique of the unconscious," which is hardly a dismissal of it. Rather, from this critique, "and as practice of the pharmakon as transitional object, a new critique of consciousness becomes possible, a new theory that can only be a political economy of the spirit as the formation of attention, itself conditioned by the play of primary and secondary retentions, a play of retentions that the pharmakon, as tertiary retention, authorizes" (23)

These "consistences" as transitional theoretical objects an be transmitted is through tertiary retention, or rather, objects that function  as a memory object for the collective. So tertiary retentions help transmit our consistencies that we may infinitize. These "consistencies" may be understand as something like a composition of desire and memory that lead us to a trust and hope in a future. Consistencies are thus what Stiegler calls "knowledge" as opposed to "information." The worth of knowledge increases over time whereas the worth of information decreases. These are obviously relative terms so that we cannot make any sort of absolute declaration of what is knowledge and what is information. However, for simplicity's sake, let's contrast Aristotle's Poetics with up to date information on the weather. Tomorrow, that information is irrelevant, whereas Aristotle's Poetics still sur-vive in even the most contemporary texts, if only as a model to be refuted or transformed.

But what I want to get at is why Stiegler is so insistent on calling the bad consumerist society a society of drive. In interviews, Stiegler has promised that the fifth volume of Technics and Time (we haven't even the fourth volume in French or Engilsh yet--although we have the title -- Symbols and Diabols) will deal with Freud and Lacan ("Rational Theory of Miracles"). But so far it is Winnicott's theories that have taken center stage, despite the way in which we might think of Lacan's theory of the "lack" in terms of the Fault of Epimetheus (the de-fault). Stiegler remarks that "the logic that Lacan attempted to describe as 'lack'" is "precisely not a mere lack, but on the contrary necessary: the stoic quasi-cause" (24). In a footnote, Stiegler acknowledges that it was Gilles Deleuze that brought back the concept of the quasi-cause, but Deleuze "does not enable us tot hink the relation of desire and technics" (138).

Reading Lacan, one gets the sense that he thinks the drive has been vastly undertheorized. In Fundamental Concepts of Psychoanalysis, the libido (the sexual drive) is "ungraspable" and "unreal."

Stiegler too refers to the libido, whose figure is Promethean fire, which is a symbol for desire and technics. The libido: "the subject par excellence of the pharmacology of the unconscious" (24).

"In other words, the two tendencies of the pharmakon are the two tendencies of libidinal economy: these are, pharmacologically, when on the one hand it produces long circuits through which it becomes care, entering into the service of the libido oriented through sublimation; and when on the other hand it produces short-circuits, short circuiting and bypassing sublimiation, that is, the binding of the drives. Long circuits connect or bind the drives that are disconnected for unbound by short circuits." (25)

For Stiegler, "drives," without their binding by some kind of technical prosthesis of sublimation (the libido?)), are inherently "destructive." Stiegler argues that the drive consumes its object (91). However, for Lacan, the consumption of the object directly will not satiate drives. Rather, the drive endlessly circumvents that object in a play that might be akin to the kind of "infinite motives" of the transitional theoretical object. The object for the Lacanian drive remains objet petit a. For Lacan, drive and desire are coupled in a more essential way than the almost binary (although he insists it is pharmacological) relation posited in What Makes Life Worth Living: "The third limit of capitalism [. . .] is the limit constituted by the drive to desire all objects in general through consumption, insofar as they have become objects of the drives rather than objects of desire and attention" (92).

Lacan defines the libido as " pure life instinct, that is to say, immortal life, or irrepressible life, life that has need of no organ, simplified, indestructible life. It is precisely what is subtracted from the living being by virtue of the fact that is subject to the cycle of sexed reproduction” (Lacan 198).

Thus, libido in some way is this pure force that is turned toward drive because of our condemnation to sexual reproduction. What I find so fascinating about this definition is that, in Stiegler, it is precisely because thought is impossible without the technical prosthesis that forces us to transmit, inherit, and adopt knowledge via tertiary retentions. The libido's fall into the cycle of sexed reproduction is also our fall into the necessity of differance, the trace, tertiary retention -- our default, our double lack. These tertiary retentions, if we care and pay attention to them in the way Stiegler suggests, are the sublimations of drives that makes civilization possible.

Lacan writes, "the libido is the essential organ in understanding the nature of the drive. This organ is unreal. Unreal is not imaginary. The unreal is defined by articulating itself on the real in a way that eludes us" (Lacan 205). Once again, this sounds as if the libido, essential to understanding the drive, consists rather than exists or subsists. But we only have a partial libido-- a partial drive--because, once again, as Lacan tells us the libido QUA pure life instinct/immortal life/life of no need of an organ is subtracted from us because of reproduction and because we are subjected to the differance/trace/the metonymic chain of signifers that constitute the subject. The libido is thus inevitably tied to the drive. The drive is a prosthesis of the libido that creates a circuit of desire which will never be able to overcome the gap of the unconscious nor the fall into reproduction (the lack).

Why call the drive the 'organ' or the 'prosthesis' when Lacan calls libido the organ? Because Lacan writes that the organ has to be understood as "part of an organism" but also as an instrument. Furthermore, the way Lacan describes the drive is as a composed, organ-izational system consisting of parts. The drive is a surrealist montage. The drive is a technical work of art! The drive is composed and consists in four terms:

Perhaps the infinitization and intentionalization of motives in a theoretical/transitional object is akin the "circuit" of the drive described by Lacan. The drive is "short-circuited" if we imagine that we've reached a goal other than the return of the drive to its circuit. The long circuit of the drive's path is what makes a subject appear. If for Lacan the signifier is that which represents the subject to another signifier and it is through this circuit that new signifers are generated (and thus, a multitude of 'subjects' that are always already fading) than might we not understand this generation as the process of "transindividuation" as elucidated by Stiegler via Simondon? This "headless subjectification," a "subject-with-holes," would thus signify the potential for infinitization. Another way to say this is that it is through "subjectification" that we produce transitional theoretical objects of infinite motives. Like the transitional object, we can argue that the "subject" in Lacan does not ex-ist, but rather consists in the movement of the signifier representing the subject for another signifier.

On the other hand, one might also understand the drive impulse, if it always attains its goal (a peverse satisfaction in the dissatisfaction of desire) as that which inhibits an meaningful (trans)individuation. Lacan describes the drive as something which produces homeostasis. Perhaps we are satisfied through our "drives" by the dissatisfaction of our desire and rather than producing collective libidinal energy, we are merely circulating various objects, getting pleasure from whichever one comes our way.

But again, Lacan seems to point toward the idea that the repression of lidinal energy (through the drive?) is what allows for Stiegler's idea of 'attention':

"Somewhere Freud says quite categorically that it is the pressure of what, in sexuality, has to be repressed in order to maintain the pleasure principle--namely, the libido--that has made possible the progress of the mental apparatus itself, as such and, for example, the establishment in the mental apparatus of that possibility of investment that we call Aufmerksamkeit, the possibility of attention." (Lacan 184)

In other words, perhaps we need the drive as the apparatus of the libidinal organ to maintain homeostasis, and, in turn, make possible the desire for transitional objects?

Graph of the Drive 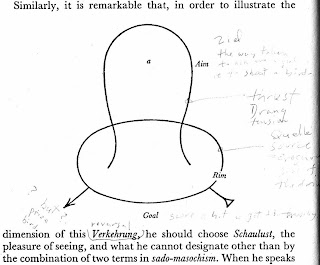