What is the difference between Eduardo Kac's GFP Bunny (Alba) and the Tortoise with a Desk Chair Wheel? 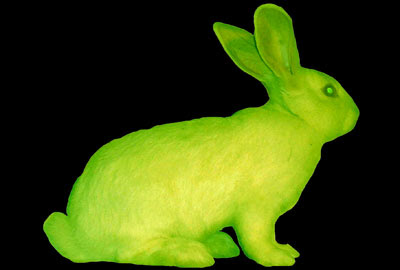 Today we were discussing animal prosthetics, particularly the turtle with the wheel. Sid said that he hoped the reason the turtle had the wheel was because of some birth defect or that he lost a leg rather than the desire of the consumer, and I hope that too, because what would happen if we as consumers said: hey! I want a turtle with some wheels as a pet! As Melissa pointed out, many of the animals with prosthetics are pets because of the expense of the augmentation. The exception to this may be when the animal makes money, such as a race horse.
The same worry about access, money, and the fetishization of intriguing animals has made people question Eduardo Kac's GFP bunny project. I'd like to point out some of the differences between Alba and the wheel turtle.
1.) Alba does not always glow green, but only under certain light whereas the wheel turtle is 'abnormal' either in the way that he has a leg missing or the wheel. This is significant because Alba's glow is not every present, always marking her as different. Kac writes that "for those that are unaware that Alba is a glowing bunny, it is impossible to notice anything unusual about her. Therefore, Alba undermines any ascription of alterity predicated on morphology or behavorial traits. It is precisely this productive ambiguity that sets her apart: being at once same and different" (Kac, "GFP bunny," 274; also found on his website that for some reason is currently down).
2.) In addition to the invisibleness of Alba, as Kac says, Alba does not exhibit any different behavior. In other words, it does not seem like Alba's modification has changed her embodied way of being in the world. In contrast, as we can see, the wheel turtle, like anyone with a prosthetic, has to reconfigure their embodiment, at least at first. People who now have prosthetic legs have to learn how to move them and operate with them.
3.) Alba's modification took place before/while she was born. That is, it's not as though Kac took an albino bunny fully grown and injected her with something. Thus, Alba has never known herself to be otherwise (I use known full well knowing I am anthropomorphizing). The turtle, however, may have adapted to function without the leg, but as human beings, we think--huh, he would probably move around better with a desk wheel. Alba's modification, again, has no corrective function.
I suppose why I highlighted these few difference is to think through the different kinds of modifications. We usually don't call things that are invisible "prosthetics." Does a prosthetic always have to "replace" a missing body part? Alba's modification seems like excess rather than replacing a lack. Alba's GFP is a pro-aesthetic.
Both of these differences highlight the fact that Alba's case remains ambiguous.
Posted by Jtriley at 6:18 PM

Email ThisBlogThis!Share to TwitterShare to FacebookShare to Pinterest
Labels: Posthumanism