In his book, Natural Born Cyborgs, Andy Clark argues that 'human-centered technologies' have the capacity to enhance and add to our various social and embodied relations rather than replace them. Rather than technologies trying to re-create, imitate, or simulate (poorly) other relations, Clark sees them as supplemental to them. This can be illustrated by his distinction between VR and AR (augmented reality):


But instead of trying, as with standard Virtual Reality approaches, to re-create a simulacrum of the real physical world entirely inside some computer generated realm, the goal of Augmented Reality is to add digital information to the everyday scene. (52)

Clark's book was written in 2003, before the Iphone was released (2007) and the "app" revolution had taken place. This book accurately predicts the shift from an isolated individual tapping away at her life vicariously through the keyboard to the mobile technologies that enhance our surrounding world and social relations, such as the Iphone and its companion technologies.

Another way in which I personally see the shift from technologies that try to "replace" social relations to enhancing them is various social network services--facebook and twitter. As an academic, I use FB and twitter, mostly, to share links to my blogs, other blogs, sites that relate to my and others' work rather than using it as a primary interface for personal 1-to-1 interaction. That is, I post and I post and I post and then I cannot wait to discuss "what was on facebook" face-to-face at a bar with my friends. FB has actually enhanced my ability to share media with others, which in turn, helps enrich our conversations at the bar or at the office. "hey, did you read my blogpost about such and such?" "Oh hey, Kyle, did you see my response to your blogpost?" Furthermore, such technologies force us to incorporate writing into our lives as it never has before! I guarantee that my students "write" their interactions more than I ever did when I was in college. Thus, we talk about writing and write about talking--the line blurs and the fiction of an authentic "presence" drifts slowly away--at least ideally.

In other words, I think Clark's emphasis on the hybrid, embodied, and supplemental/addition approach to these technologies is spot on. This relates to our discussion Wednesday about the video in which technology uses the "hand" but does not use it to its fullest potential. Perhaps rather than focusing on what the technology allows us to do we should focus on how it does it. This leads us to the question of interface. I think that we should really think about "Tangible User Interfaces in which familiar physical objects, instruments, surfaces, and spaces are used to mediate our exchanges with digital information systems" (51). Clark gives 2 great examples.

The first is Yo Yo Ma's electronic cello:


It is an interface that has been tuned and adapted over centuries of use, and to which the human cellist has devoted a lifetime of study. Why throw all that way in favor of a few buttons and a mouse? If synthesized music can sometimes sound cold and lifeless, might that have more to do with the use of such stale interfaces rather than the potential of the digital medium itself? (51) 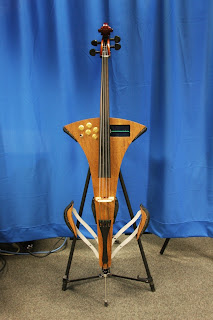 Let's stay with the musical instrument example for a minute here, particularly given my own attachment to the interface of my guitar. In What Things Do, Verbeek speaks of the piano as a powerful interface:


A piano, however, is never entirely ready-to-hand, but neither is it exclusively present-at-hand--its machinery is not completely in the background, but not entirely in the foreground either. (194)

In Clark's language, then, the piano is not entirely transparent: "Transparent technologies are tools that become so well fitted to, and integrated with, our own lives and projects that they are primarily invisible-in-use" (28). Musical instruments, I think, will never become 'transparent' because not everyone plays a musical instrument. Even when playing, musical instruments never go away or move out of sight. I feel the strings pressing on my fingers, creating the calluses earned by too much playing, ripping my skin off, penetrating my outer layer. I work with my guitar in the same way that people might work "with" Augmented reality.

Now I want to think about the video game Rock Band. My problem with Rock Band is not that somehow it loses the "authenticity" of playing a "real" instrument. I will make two points: the way it changes the 'goal' of music or playing an instrument and the poor interface of the guitar and bass compared to the powerful interface of the drums and vocals. 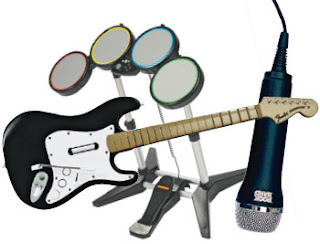 In Rock band, the goal is to "get through the song" without failing and to hit the notes perfectly in order to get the highest score. The instruments are a means for interacting with the directions on the screen. The notes you 'play' on the instruments are pre-recorded--whether you hit the instrument harder or softer, does not matter--you will sound like Kansas when you play "Carry on my Wayward Son." Each performance (with the exception of the vocals-more on this later) is an iteration of a pre-recording. That said, it is true that each performance will have various "mistakes" that sound like clicks or chinks in the system when you mess up, but if you play it 'perfectly' it is like re-enacting a recording--'triggering' a recording rather than creating a recording. Furthermore, the point is not the performance itself, but the 'points' you earn. In order to bring it into writing theory--you are a machine reading a text--a script that has one way of playing--this is not a "writerly" text as Roland Barthes might say. Indeed, part of the joy of "covers" for a musician is the ability to make the song "their own" through their particular quirks. In other words, Rock Band is not an enhancement of music, but an attempt at simulation.

Interface wise, I prefer playing the drums or the vocals. Why? Because the drums involve the whole body in the same way that analog drums involve the body. With the exception of the vibration that occurs from hitting a brass cymbal too hard or on the right spot, you get similar bodily responses from the electronic drum kit. True, the drums are all just different colored circles, but they correspond to a certain extent where the analog drums might be. And still, it must be pointed out, the sounds possible on the drum set are fixed--no subtlety of touch is taken into account (compare an actually "electronic" drum set that you might find in a music store). Still, a drummer who has played on analog drums is better than a drummer who has never played drums.

Because I am not much of a drummer, but a vocalist, I prefer vocals. Why? Because the interface is pretty much the same as any microphone--and though you could simply try and hit the little lines that indicate you have the "pitch" right and still sound like utter shit--I prefer to sing my heart out, as if I were engaging in Karaoke. The interface here does not change much and the goal, at least for me, is performance.

Finally, we get to the "guitar" and "bass," which, by the way, can be played on the same 'instrument' because they have the same set up. The guitar, rather than strings, is replaced with 5 buttons at the end of the neck and the strings that you would strum is replaced by a little flap of plastic. I personally cannot stand these things. No respect for the flow of notes creating by muscle memory, dexterity, and delicate or heavy plucking or strumming. To me, this interface is a poor substitute for the guitar. Playing becomes a matter of pushing buttons--the opposite of Yo Yo Ma's electronic cello.

What I am trying to point out is that the musical equivalent of Augmented Reality has been here for a long time--I am speaking, of course, about FX pedals. Rock Band makes you feel like you are working "Through" the interface rather than with it--and thus, if your controller broke you probably wouldn't give a shit.

In contrast, if my guitar broke--and some of my guitars have--it is devastating. It is not completely "non-usable"--and indeed I still to this day haven't thrown out my 'broken' guitars, but it saddens you to know that you cannot work "with" it anymore--you have to give it up or at least put it away for awhile. You care about these instruments that bear the traces of your skin and, in the case of my old Fender Strat, my blood that streamed from my finger when I used to not use a pick.

Thus, I would like to make the argument that we should find a way to care for our interfaces in ways that do not make us think of technologies/instruments as mere instruments. This, I think, is the project of Eternally Yours, as Verbeek explains it. I don't think that it is the "'memories" of my guitar that make it such a powerful interface and tool for making music--rather, it is the material traces of skin--the indentations on the wood, the pick scratches, the feel of the familiar.

The same thing might be said for my tobacco pipe. Cigarettes disappear and end up on the ground, but the tobacco pipe bears the traces of former smokes. Furthermore, it does not "disappear" into a means for getting nicotine--it puts a constant weight on my teeth, lips, and hand. If I don't treat it right by consistently drawing the smoking and blowing out, the tobacco goes out, and I have to relight and retamp. I have to empty the ashes. The tobacco pipe creates a ritual, a form of being and a connection to an object that, again, is about material interf(t)races of a certain kind.

This is how we get past this idea that these new technologies will makes us "treat human beings like software agents" (179). If we can cultivate care for non-living entities and also make sure that they demand something back. This is the key. We cannot simply allow all technologies to adapt directly to our needs and desires--they need to also demand care and maintenance and, hopefully, we can make such demands visible and tangible.


All of this said, it is worthwhile to note the positive aspect of Rock Band--that it is a great way to spend a drunken evening with some friends.
Posted by Jtriley at 11:22 AM